What a Thermal Image scan will provide?

Heat loss, moisture penetration, and electrical panel overload are the three areas of main focus in our Thermal Imaging service. As a fully Certified Residential Thermographer, we are able to perform a thermal image scan of your home and provide you with up to a dozen thermal images paired with their digital counterpart for comparison.

Thermal imaging is beyond the scope of a standard home inspection but, when done in conjunction with other testing equipment, it can isolate problems in the structure and systems of your home that would otherwise be invisible.

If you are purchasing a new home and want to be assured that you fully understand your investment before you purchase, then add a thermal image scan to your home inspection.

What is Thermal Imaging?

Thermal imaging is a physical science that allows us to capture light in the Infrared spectrum of the light scale. It measures an object’s heat radiating off itself. Thermal cameras record the temperature of various objects in the frame and then assign each temperature a shade of a color or shade.

Here’s a brief explanation of how thermal imaging works:

“All objects emit infrared energy (heat) as a function of their temperature. The infrared energy emitted by an object is known as its heat signature. In general, the hotter an object is, the more radiation it emits. A thermal imager (also known as a thermal camera) is essentially a heat sensor that is capable of detecting tiny differences in temperature. The device collects the infrared radiation from objects in the scene and creates an electronic image based on information about the temperature differences. Because objects are rarely precisely the same temperature as other objects around them, a thermal camera can detect them and they will appear as distinct in a thermal image.” – Tech Target 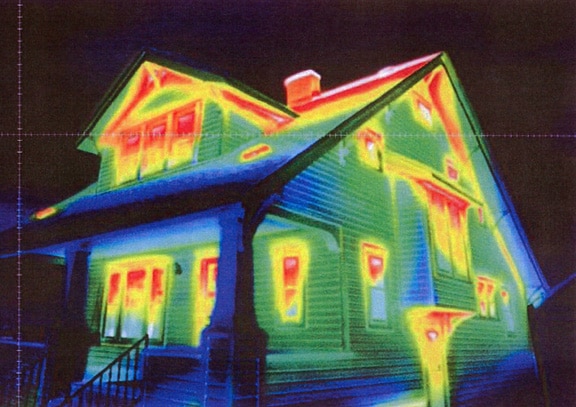